Vido Opusich was tried in Judge Lawlor’s court in March 1901. He pleaded Not Guilty, by reason of insanity and self-defense.

The San Francisco Examiner wrote skeptically, “Opusich, who claims to be only 21, but appears to be older, shot and killed John Petrovich, an old man, in the Dalmatia saloon, on Pacific and Stockton streets, on June 10, 1900… The jury considered the case for six hours. Ten jurors wanted to return a verdict of murder in the first degree, but the remaining two jurors held out for a verdict of second degree, which was finally agreed upon.”

END_OF_DOCUMENT_TOKEN_TO_BE_REPLACED

It’s the last day of Mugshot March! This calls for something spectacular, so this evening, I bring you the tale of Mrs. Margaret Rowan, founder of a cult, attempted murderer, and eventual prisoner at San Quentin penitentiary.

Wade and Rowan formerly belonged to the Seventh Day Adventist Church, but Mrs. Rowan soon created a problem. In 1925, she predicted the exact date on which the world would end. When that date passed, and people found the world was still intact, Rowan was excommunicated. Mrs. Rowan soon established herself in Los Angeles, with a couple of followers. The papers that refer to Mrs. Rowan as a cult leader are referencing the sect she established, not the Seventh Day Adventists.

The story begins in February 1927, when all Southern California police departments received a description of Mrs. Margaret Rowan, who they described as a prophetess or priestess. An automobile owned by Mrs. Rowan was found abandoned in a ditch off the highway near San Juan Capistrano, and Los Angeles authorities expressed the fear that she may be a fugitive, heading for the Mexican border. Mrs. Rowan was wanted in connection with an alleged murder plot, and a warrant had been sworn for her arrest.

Two of Rowan’s lieutenants and devoteés, Dr. J.H. Balzer and Miss Mary A. Wade, were accused of attempting to murder Dr. Burt E. Fullmer. Mrs. Rowan and Dr. Fullmer had a theological disagreement that turned deadly. Dr. Fullmer who had also broken off from the Seventh Day Adventists to start a reform-minded sect. Dr. Fullmer claimed the pair attempted to murder him after he had threatened to reveal some unsavory activities Mrs. Rowan had been conducting.

Around 10 p.m. one February evening, Dr. Fullmer received an anonymous phone call at his home in Los Angeles. A woman’s voice, which he later identified as that of Mrs. Rowan, said that a good friend of his needed to speak to him immediately. The caller implored Dr. Fullmer to come to a lonely auto camp in Van Nays. When he arrived at the cabin, a man and a woman leapt at him, beating his head with a piece of lead pipe and stabbed with a hypodermic needle.

Dr. Fullmer fought his way out of the cabin. Once outside, others at the camp saw what was happening and ran to Fullmer’s rescue. They forcibly detained Dr. Balzer and Miss Mary Wade, and the pair were arrested at the scene.

The initial police investigation turned up several ominous items in the cabin, such as a large piece of canvas, a rope, and a shovel. Dr. Balzer agreed to be interviewed and he told police, “We were driven to the limits of desperation by this man his persecution has been terrible we had no intention of harming him are only thought was to force him to retract the malicious untruths he has been circulating.”

The following day, police called on Dr. Fullmer. The injured man snorted in disgust when he was told Miss Wade and Dr. Balzer said they had not intended to hurt him. “They were planning to kill me,” he shouted. “What do you suppose they had that pick and canvas for, if it wasn’t to bury me?” 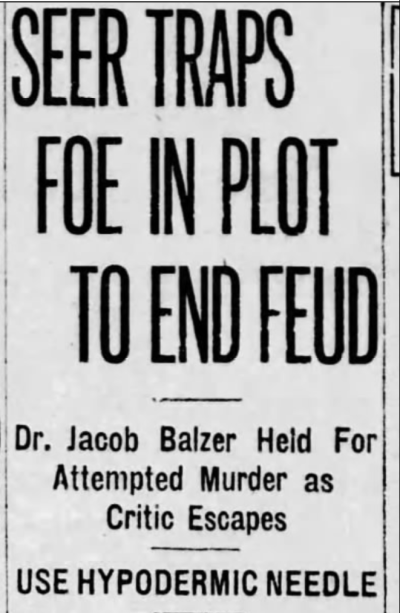 Witnesses at the scene corroborated Dr. Fullmer’s story. One man said he saw Balzer and Wade try to choke Dr. Fullmer, and then Miss Wade repeatedly jabbed at Dr. Fullmer’s arm with a hypodermic needle. With that, police had enough to charge Mrs. Rowan, Dr. Balzer, and Miss Wade with conspiracy to commit murder. Dr. Balzer and Miss Wade admitted to participating in the attack, but they claimed Mrs. Rowan was really at fault for convincing them to do it. Dr. Fullmer also told police that he believed Mrs. Margaret Rowan was involved.

But Mrs. Rowan was nowhere to be found. For nine days, police searched for her. And then, she limped into the police station on crutches and turned herself in. She explained to police that she’d had nothing to do with the attack of Dr. Fullmer. Far from it: in fact, Mrs. Rowan was the victim.

Ignoring the incredulity of the police officers, Mrs. Rowan told them that she, too, had received an urgent, mysterious summons to come to the auto camp. She stepped into the cabin, where she was jumped by a man and a woman. But somehow– she was a little vague on the details– she had gotten away from them and gotten into her car, and raced off into the night.

Mrs. Rowan drove for a long time, putting many miles between herself and her mysterious attackers. When she reached San Juan Capistrano on the Ocean Highway, her good luck ran out when her automobile stalled. Despite having fended off two attackers wielding deadly weapons, Mrs. Rowan sank into despair. She waded out into the ocean, she told the officers, and attempted suicide by drowning three times in a matter of minutes. Somehow she failed to end her life and strayed back to shore. “I slept in a field that night,” she said solemnly. “The next day, I begged for rides to Phoenix, Arizona. I borrowed the money to get back to San Bernardino.” Mrs. Rowan then called her son who lived nearby. He offered to take her to the police to turn herself in, and she accepted.

Police officers and reporters laughed merrily as they heard her story. No one believed a word of it, and despite their appreciation for her imaginative tale, Mrs. Rowan was placed under arrest and taken to county jail. She would be held there, with her followers, and bail was set for $2,500 each.

Mrs. Rowan, Dr. Balzer, and Miss Wade pleaded Not Guilty the following day, but they soon reconsidered. The trio had no realistic defense for their attempted murder of Dr. Fullmer. The following day, all three pleaded guilty to the lesser charge of assault, with intent to commit bodily harm.

Mrs. Rowan, Miss Wade, and Dr. Balzer were denied probation in July. Superior Judge Fletcher Bowron, citing the clear evidence of their intent to murder Fullmer that was found in the cabin refused to consider probation. Instead, Balzer and Wade were sentenced to serve from 1-10 years in San Quentin penitentiary, while Mrs. Rowan got 10. 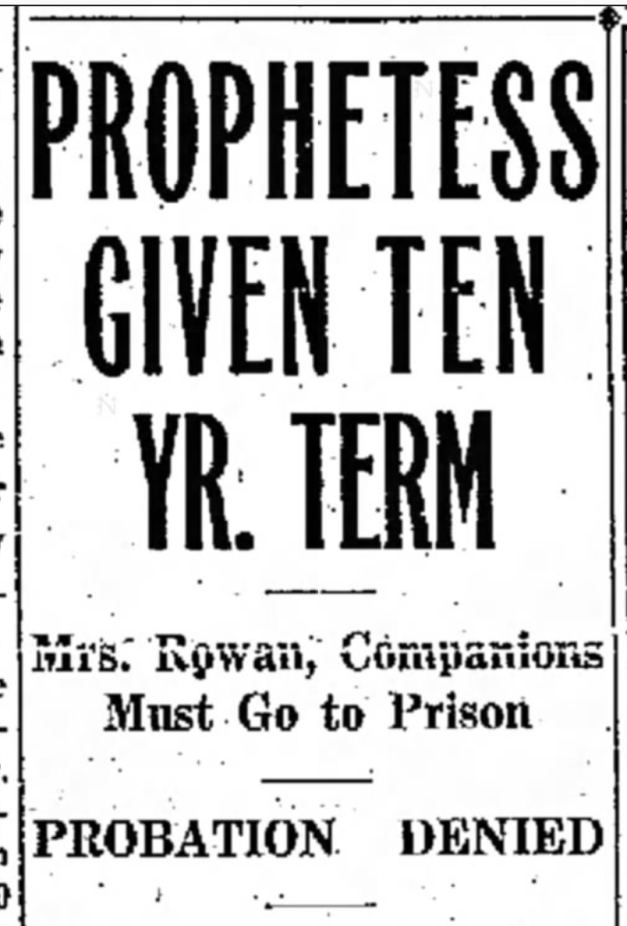 I didn’t manage to find Dr. Balzer’s mugshot, but have a look at Miss Mary A. Wade and Mrs. Margaret Rowan. Do they look like a murderous cult member and prophetess to you? I’m experimenting with a new style I’m calling From the End. I’ll tell you the end of the story first, and then give you the background. If it goes well, I’ll write more posts like this.

There is a prison at the base of the mountains near Tehachapi that was constructed in 1932 to rehabilitate women. Today, the facility is a supermax all-male prison known as the California Correctional Institution.

In February of 1941, the cells were still filled with female prisoners. Through the grim passages passed a tall slender woman in her late 40s, following a matron.

Eva Rablen had been paroled by the board of directors at the California Institute for Women at Tehachapi, over numerous protests and against the recommendations of the Tuolumne County Superior Court and officials. She had been a prisoner longer than most other inmates: 11 years, 8 months, and 8 days. Eva was one of the original prisoners who was transferred from San Quentin to Tehachapi, as the new prison was typically called.

She had been infamous but it was a forgotten woman who emerged from behind Tehachapi prison walls. No one appeared to be waiting to greet her when she stepped outside, but she dunked into a waiting car that spirited her away.