Harry Thaw’s murder of Stanford White is so well known, I rarely see anything I’m not already familiar with related to th  famous 1906 shooting at Madison Square Gardens. I came across several things related to Harry Thaw I’d never seen before.

The first item is his mugshot. I’d never seen it. At the turn of the century, male and female criminals were often photographed with and without their hats on.

Once I knew it existed, I went looking for a better quality copy of the mugshot. I didn’t find one, but I did learn that Thaw later wrote a bizarre 324-page book called The Traitor about his life that was published in 1926.

It included a collage of pictures titled “Evelyn’s Moods”:

In 1916, Thaw was charged with kidnapping, beating, and sexually assaulting a teenage boy. The papers said Thaw had “cultivated” the boy for a year, and promised to pay for his tuition at the Carnegie Institute. 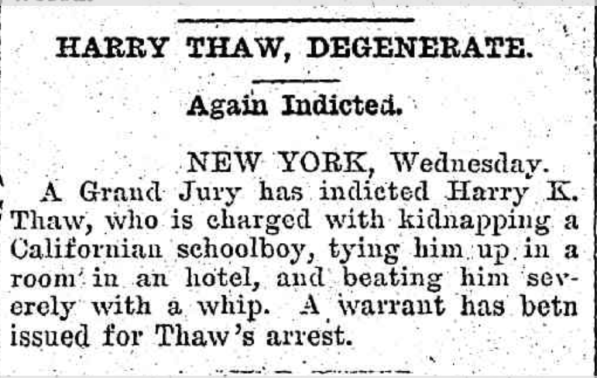 After the assault, Thaw fled to Philadelphia and attempted suicide by cutting his own throat in an apartment there. Later, Thaw was apprehended and his attorney contended his suicide attempt was evidence of his unsound mind. He was again found to be insane and this time he was placed in Kirkbride Asylum where he was held until the mid-1920s. The Library of Congress has a picture of the house where Thaw cut his throat. It’s one of the more bizarre items in the archives. I suppose it’s kind of consequential since Thaw was a person of note. But the house’s connection to Thaw was tenuous and there is nothing else about it that’s significant. It’s like someone keeping the receipt for the camera that shot the Zapruder film, or obtaining the remnants of the last cigar Winston Churchill ever smoked. It’s not quite close enough to the important person or event to matter.

Finally, I came across a picture of Harry and Evelyn, long after their marriage ended, looking rather picturesque.

Just a short post for today, but there are lots of Evelyn Nesbit related posts on Old Spirituals, if you’re interested!

Evelyn Nesbit: A Star is Born

Evelyn Nesbit: The Girl in the Red Velvet Swing