TR was nearly broken at the loss of his young, beautiful wife and his beloved mother. He drew a cross in his diary and wrote, “The light has gone out of my life.” He consigned Little Alice to his sister’s care, forbade any mention of his dead wife, and headed west to forget.

The circumstances were sad, but not pitiful. Money was no object for the wealthy Roosevelts and Alice’s unmarried, childless Auntie Bye lavished attention on her small niece. Her father wrote occasionally, referring to his daughter as “Baby Lee”.

Eventually, TR returned but he never again mentioned Alice Hathaway Lee’s name. Perhaps the grief of losing her continued to haunt him, but soon there was another reason for this silence. When Alice was nearly three, TR married Edith Carow.

Edith was more than the second wife. She was engaged to TR before he married Alice’s mother, but they fought and he found someone else – the polar opposite of the austere Edith.

TR, suffering from complex feelings of guilt and infidelity, was all for having his sister continue to raise little Alice. Edith’s obvious resentment of his first marriage would have made that the most logical solution.

Edith, however, insisted that Alice come to live with them. She was adamant that she would raise the little girl, and the child would call her Mother.  So began an uncomfortable situation that persisted for many years.

The tension never eased, even as the years passed and TR and Edith had five children together.

Edith could not have been an easy woman to live with, even for those she loved. For the child of her husband and his first wife, she would have been no picnic. 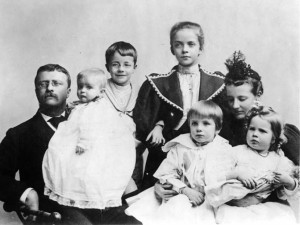 TR would never permit himself to recall the beautiful Alice Lee. Her name does not appear in his autobiography. Edith, however, was induced to mention her predecessor occasionally. Once she told Alice that if her mother had lived, she would have bored her father to death.

That is not to say that Edith did not take good care of her stepdaughter nor that her father didn’t love her. But it could not have been a comfortable environment in which to grow up.

All things considered, Alice’s rebellious teenage and young adult years may be more understandable. By the time William McKinley’s assassination put TR in the White House in 1901, Alice was a Victorian paparazzi magnet and a style maker.

She developed a taste for creating scandal, but that will have to be another post.