Victorians rarely smiled in pictures, so they look stiff and starched to modern eyes. The staid images staring out at us seem like they never laughed or wasted time or thought about anything interesting.

When photography was young, getting your picture made was a major event that required that required Solemnity and Poise. Subjects had to sit absolutely still for several minutes because any movement on the subject’s part caused a thick blur on the image. Also, Victorians really valued conformity and privacy. They didn’t want to stand out or draw undue attention to themselves.

That’s why it’s so delightful to find some strange detail or flaw in an old picture.   Occasionally, it’s something funny but usually, it’s just a little oddity, some obscure clue to their humanity or their environment. Here are a few photos with serendipitous details. If you happen to be very observant, you might find a detail I missed. If so, please leave a comment and let me know!  🍀

This semi-formal photograph was made circa 1900.

There are six people in the photo, but the subject is undoubtedly the girls, or maybe the girls’ shoes. There is a little boy next to the girls, but he’s clearly an afterthought. The mother is a watchful presence in the picture. It’s interesting to think about the choices the photographer made: Not everything would fit into the frame, so he chose to sacrifice the man standing in the back so he could be sure to get the girls‘ shoes in the picture. They are outside, but the girls’ feet are resting on a rug. They don’t look like the type of people who would leave a rug outside. There must be something about their shoes. (Also, I love the Peter Pan collar the girl on the left is wearing.) 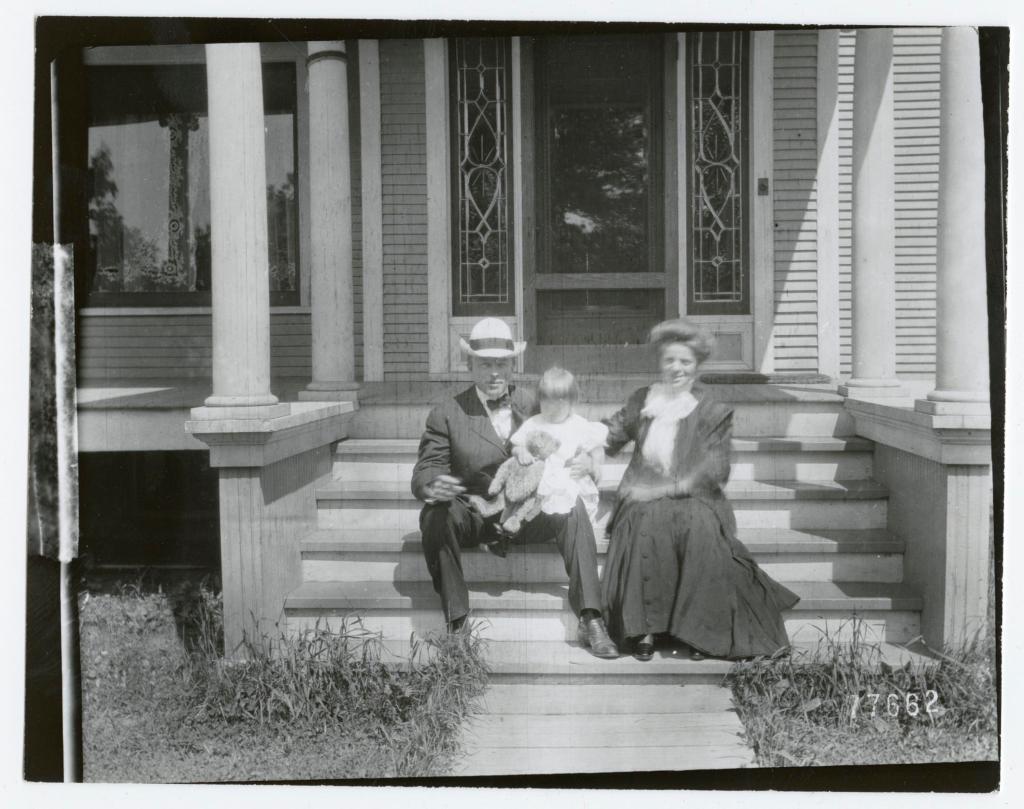 This photo depicts a young family sitting on their front porch circa 1895. Apart from its very modern-looking front door, this picture is interesting because only the man’s face is clear, while the woman and the baby are blurred in motion. Somehow looking at this photo gives me the idea – maybe completely wrong and unfair – that the man was really vain. Possibly because he was so careful not to move, and possibly because of his absurd hat.

This picture has lots of hidden weirdness. Everyone is dressed in traditional American Indian clothing, except the woman on the right. Some people are looking seriously at the camera but something has caught the attention of the other people and they are looking to their left, at something we can’t see, and smiling. There’s also the little girl standing behind the woman, clutching a couple of rings. Her fingers are a little deformed.

This is a photo of the mayhem in San Francisco, immediately following the Great Quake of 1906.

The flood of refugees are toting weapons, carrying food and luggage, and attempting to push their way out of the city. And right in the middle of this mass of unmoored humanity, we find our serendipitous detail. In the foreground, a lone policeman is trying to direct traffic. This guy was really dedicated to his craft!

The people in this picture aren’t doing anything, but they grow more and more interesting.

The couple on the left are probably the parents of the men on the right, but the boy seems too young to be their son. Maybe a grandson?  People (especially families) tend to mirror one another’s body language, but all five people are posing in distinctly different ways and their demeanors range from formal, to awkward, to saucy. Also, why is the guy on the far right wearing giant mittens? We can see the front door behind the men, but no steps are there. Did they just leap off the porch every morning? Way to start their day!