Today’s post features separate and- as far as I know, at least- unrelated American Indian subjects. All pictures are from the Library of Congress. There is scant information about these images, but what is available is included here.

The first is Moon Beam. This young woman was a Potawatomi Indian who was photographed in June 1909 by C.F. Squires, of Lawrence, Kansas.

The next photograph is called Voices of the Woods, and features a young girl identified as Indian-Hawaiian. She was photographed in 1909, by Caroline Haskins Gurrey. She was certainly very lovely.

The next photograph was called A Dusky Madonna. This young woman was photographed by Martin P. Spencer in May of 1902, in Wenatchee, Washington. We know little about the subject, except that she is from the Northwest, probably the Plateau region. She may possibly have been Spokane.

This picture is called Columbia, and it is the only one that gives us the subject’s name: Nancy Columbia. Nancy was a little Inuit girl. This picture of her and her dog was taken in 1904, at the Louisiana Purchase Exposition in Missouri. She was photographed by the Gerhard Sisters, of St. Louis, Missouri.

I wonder what sort of a dog this is. Once upon a time, I had a friend who had a dog he said was part wolf, and his dog looked a lot like this one. 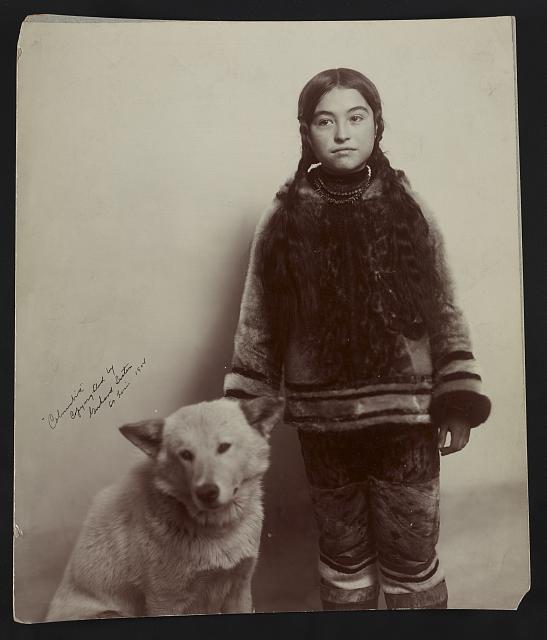 Last, we have a photograph called The Cigarette, from 1908. I’m not sure if this is universally true, but in my experience, there aren’t very many pictures of young American Indian men, at least in comparison to Native American women. This young man was a Sioux Indian, who was photographed by John A. Johnson of W. Somerville, Mass. He looks like a movie star.