This is a bit outside our normal timeframe, but I hope you like this little story.

In April 1937, Mr. and Mrs. Stewart William Blodgett, were still new to Oakland, California. The couple had moved to California from Saint Paul, Minnesota, with their 5 year old son, William Grinnell Blodgett II. One day, the boy was at a local park with two neighbor children, when he was kidnapped.

Leroy Gardener, 5, and Joan Gardener, 8, told police that a smiling, hatless young man of about 23 had approached them in the park early in the afternoon. He wore a gray suit and white shoes, and he suggested a race to the corner store for candy, the children said. During the race, the children became separated. Leroy said he saw William and the young man get into a brown roadster with a light tan top, Captain James Ritchie, sheriff’s investigator, reported.

It was not until an hour later when the boy’s father went to the park in search of his son that anyone knew about the kidnapping.  Mr. Blodgett appeared to be perplexed by the whole situation. He didn’t know anyone who would want to kidnap his son, and he wasn’t in financial circumstances to pay a large ransom.

Five hours later, just before dark, William walked into a gas station about 5 miles away from home.  An explanatory note pinned to his clothing read:

“I was going to hold this boy for ransom, but I decided to go straight. Please get him to his parents in Berkeley. I am in great need, but would rather starve than make his parents suffer. If they want to contact me, let them address me as Chuck in Wednesday’s Oakland Tribune.”

A grave, quiet child, William, was reportedly unimpressed by his adventure.

When his anxious mother asked how he was, he replied, “I’m hungry.”

His mother produced a piece of pie. A news photographer asked the boy to pick up the pie for a “picnic picture.”

“No,” said the child, “I don’t pick up my pie. I’d like a spoon, please.” After finishing his pie, William went to bed.

I’m a little torn about this behavior from William. On the one hand, it’s pretty funny he put the news photographer in his place. On the other hand, this child is so imperturbable, it’s unsettling. What 5-year-old gets kidnapped, dropped off at a strange gas station, and returns home to face a bevy of police and reporters, but has nothing to say, beyond a polite request for a spoon?

I’m guessing “Chuck” the kidnapper was never found. I looked at the Oakland Tribune for the following day, and there was one obscure reference that might be connected. 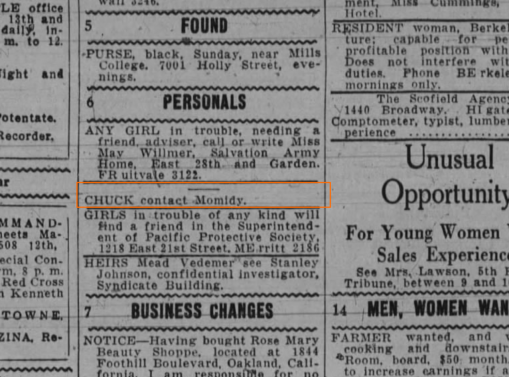 The newspapers didn’t relay anything William told them about the encounter, and I couldn’t find any follow up to this story. I’ve learned not to say, “That’s the last we’ll ever hear of this story!” because that makes it almost inevitable it will resurface later, but the important thing is, everything turned out well for William.