Charles James Laffin, was born in Australia in 1867. While still a youth, he traveled to far-away New York City, where he thrived in the New World. The precocious Laffin earned his degree in medicine from Bellevue Hospital Medical College when he was 21. He often traveled between Canada and the US. It was on one of these trips that he met Mary Andrus. He married her the following year, and shortly after that, Laffin was ordained as a minister.

This last achievement led the Laffins to take a fateful step.

There was a great deal of sickness on the western coast of Africa, of both natives and missionaries, and not enough doctors to manage. Bishop Taylor personally appealed to the brilliant young doctor to go to Africa and use his talents to help the sick. Laffin and his wife agreed. 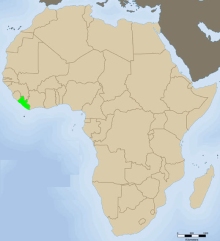 In 1894, Charles and his wife Mary had been living in Liberia for a few years. Overall, the couple appeared to be happy and Mary wrote enthusiastically to friends about their work there.

But the move had been hard on Mary. At 27, Charles had lived on three continents and he adjusted somewhat easily to the new climate, but Mary’s fevers caused her to be violently ill. Like many other non-natives, she was susceptible to diseases to which locals appeared to be immune. She was ill several times during her three years in Africa.

This time, the fever was lethal, and Mary died on Nov 3, 1894. Her body was buried in Liberia. Grief reduced Laffin’s immunity and he contracted the African fever. “He was for many weeks out of his mind,” a New York paper later explained.

The doctor decided he could no longer stay in Africa, and determined he would practice medicine in the United States. He arrived in New York City in September 1895. The brilliant doctor was hired at the Loomis laboratory of Bellevue Medical college. At some point, he became ill again with the African fever, but recovered quickly.

On June 25 1896, Dr. Laffin was remarried in Nova Scotia, this time to Clara Freeman. Their registry entry revealed his new wife was 35 years old and had never been married. Laffin noted he was a 29-year-old widower. Clara’s brother, a minister named Lemuel Freeman, was a witness. The wedding was in Nova Scotia for the sake of Clara’s family, but the couple immediately returned to New York and rented a fashionable residence on Madison Avenue. They settled down to what promised to be a quiet life.

But on Thursday, November 26, five months and one day after their marriage, their apparent serenity was shattered.

Dr. Charles Laffin was arrested on the charge of assault for inflicting shocking cruelty upon his wife, the papers reported breathlessly. The doctor was taken to Bellevue Insane Pavilion for psychiatric evaluation– the same hospital where he was employed as a physician. When questioned, the doctor claimed his wife was the best in the world but her allegations were lies. He said their marriage was perfect– when his in-laws were not present.

Reverend Lemuel Freeman appeared in New York and spoke with reporters. He said Dr. Laffin’s lunacies began on his sister’s wedding night. “Her body is covered with scars and bruises inflicted by him. His rage was devilish! He beat his wife, and one of his pet tortures was to dislocate her joints and snap them back into position. Several times he held her by the throat upon a bed until she was black in the face.” 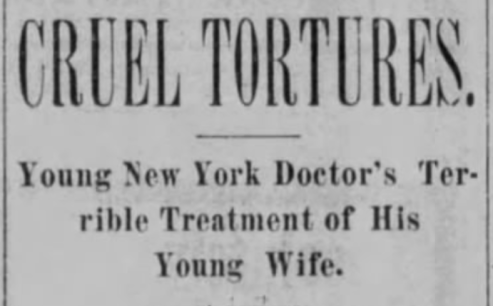 Though he claimed Laffin was insane, Freeman hinted at drug abuse as well, saying the doctor ingested arsenic and morphine. The most recent fit of insanity was triggered when Mrs. Laffin prepared to visit a friend who lived nearby. Laffin was convinced she was meeting a man and insisted on going with her. When they arrived at her friend’s home, Dr. Laffin grew more agitated. According to Freeman, Laffin pulled a knife from his pocket and threatened to murder his wife in the presence of her friend. That evening, the doctor apparently beat his wife for three hours.

Freeman said he took his sister away. New York sided with Clara but didn’t believe the doctor was to blame: “It seems a very sad case, but apparently the insanity is entirely due to the fever,” The New York Standard concluded. Bellevue Hospital, however, determined Laffin was not insane and probably never had been cruel to his wife. They released him on December 5. He had been there nine days.

When Dr. Laffin returned to their home on Madison Avenue, Clara was not there to greet him. In fact, he would never see her again.

As devastated as he was, Laffin must have been grateful to be free. Less than a decade earlier, journalist Nellie Bly had faked insanity to be admitted to Bellevue. When she was released, she published Ten Days in a Mad-House which detailed horrible details about her experience there. “What, excepting torture, would produce insanity quicker than this?”

Dr. Laffin’s brilliance appeared to falter. He left the Loomis lab, and was rumored to have been fired for incompetence. He was an expert witness at the Jennie Bosschieter murder trial and was believed to be an ineffective witness.

At last Laffin left New York and moved to New Jersey. In 1902, he petitioned for divorce from Clara, on grounds of desertion. He claimed Clara was bitter at the lack of “wealth style and prominence” she expected and deserted him “without provocation” in 1896.

In 1905, Laffin married again. His new wife was named Alexandra, and she was 15 years his junior. They were apparently happy but after living in New Jersey for 10 years, they moved to the city of Gallup, New Mexico. The doctor was employed as a government physician at Fort Defiance, Arizona- 30 miles away. Two years later, the world was in the throes of the Spanish flu pandemic, which would eventually kill between 50 – 100 million people.

The doctor caught the flu and treated himself, pushing himself to get out of bed as quickly as possible. Many people at Fort Defiance were seriously ill with the flu and there was no other doctor. On the first morning he was able, Laffin went back to work. He returned home late that evening, deadly tired.

He had overestimated his strength. Dr. Charles Laffin died the following evening.

The doctor left behind a mystery. Did he go temporarily insane and torture his second wife? Or did Clara and her brother invent the whole story?