In 1890, Clément Ader, aviation pioneer, unveiled his new invention to the world, the steam-powered Éole. It was followed by other flying contraptions, like the Avion III.

Ader was a brilliant man with a vision – or a nightmare – of what flying humans would look like. And his inspiration came from the bat.

Whatever else can be said about Ader, we should look at how ingenious the machines in these photographs are. In the early 20th century, a handful of French artists visualized life in the year 2000. Jean-Marc Côté, the artist who drew these 1910 illustrations, almost certainly had seen Ader’s prototypes:

The French inventor predated the Wright Brothers but he never came close to their success. Like Icarus, the boy whose wings were melted by the sun, Ader longed to fly. In this respect, he wasn’t successful but he was not a failure.

Clément Ader’s work helped advance aviation as a whole, and his beautiful designs could only be a product of the time. 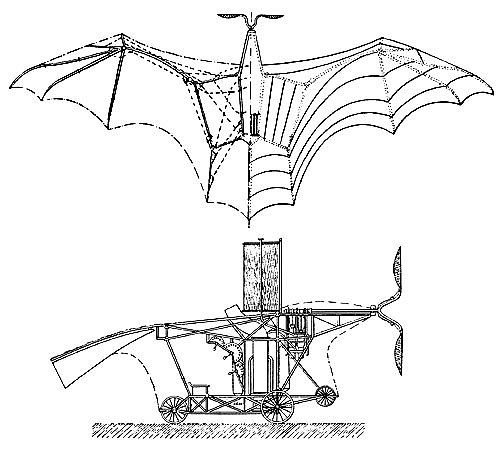 In March 1914, a world away from early twentieth century Paris, a March issue of Mississippi’s Southern Herald mentioned him as a giant who made the Wright Brothers achievements possible.

“In the search for flying honors previous to the success of the Wright Brothers are: Prof. Samuel P. Langley, one-time secretary of the Smithsonian Institution in Washington; Sir Hiram Maxim; M. Clément Ader, who was killed during his experiments; Otto Lillienthal…”

Note: Clément Ader did not die during his experiments. He lived another eleven years after this article was printed.

Clément Ader envisioned and created something completely unique, and for this, he deserves to stand apart from his contemporaries.

If you’d like to know more about Ader, there are a couple of videos on YouTube. I haven’t been able to find a very engaging one in English. This video has some great images but no sound, and there’s a short French video about Ader that has some great pictures of an Éole.