Arsenic was not uncommon at the turn of the century. It was a common means of pest control – often as rat poison. In humans, arsenic poisoning produces symptoms like vomiting, diarrhea, dehydration, abdominal pain, and death.

In a 1927 Scientific Monthly article, Professor Norman Harrar described arsenic this way: “One of the poisons known to the ancients, one of the weapons of many famous and of many more obscure criminals, one of the allies of man in his war on marauding insects, one of the most deadly of toxic substances – arsenic.”

And yet, many people took arsenic willingly and habitually. Arsenic-eaters consumed the deadly poison for many reasons, most often for its ability to clear the complexion as well as creating and maintaining a youthful countenance. 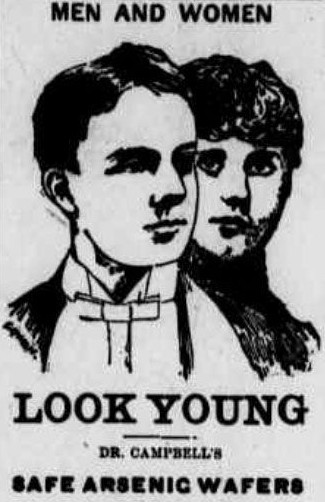 The habit was first noticed on a wide scale in Styria, a state in southeastern Austria. They called it hydrach. DC’s Evening Star said, “The habit is generally began at the age of fifteen and continued up to the ages of seventy and seventy-five.”

“Immense quantities of arsenic are consumed by the peasants of Styria and the Tyrol,” The Daily Republican declared in 1901. “According to a Dr. Lorenzo, in that district the arsenic is taken fasting, usually in a cup of coffee, the first dose being minute, but increased day by day, until it sometimes amounts to the enormous dose of 12 or 15 grains. He found that the arsenic eaters were usually long-lived, though liable to sudden death. They have a very fresh, youthful appearance and are seldom attacked by infectious diseases.” The frequency with which people used arsenic varied between every two weeks to incorporating it into their daily diets.

The first casual mention I could find of arsenic in the United States was in an 1813 article in New York’s Evening Post. A man named Daniel Lord was selling a concoction he called sweet oil, which consisted of arsenic, juniper berries, and cinnamon, amongst other ingredients.

Initially, people outside central Europe believed arsenic eaters were a hoax. It was not until the latter half of the nineteenth century that the stories were given any credence. By 1870, the newspapers were reporting on the phenomena regularly.

By 1893, American tourists had imported the habit. When some women in New York City began regularly ingested the poison, the Nebraska State Journal wrote disapprovingly, “There are arsenic fiends who daily take enough of the deadly poison to kill several persons, but it has no effect, apparently, on them. On the contrary, they gain good looks and grow fat upon this strange diet.”

“Several druggists set to work to make up other preparations, such as arsenic wafers, arsenic biscuits, lozenges, and every other method was used to administer the minute doses of the poison.” In America, only women adopted this deadly habit as a means to improve their appearance, the Journal explained.

Arsenic was even seen as a miracle drug. In addition to improving the appearance, people took it to ward off colds and brace themselves against fatigue. Arsenic eaters encountered mostly mild side effects: excessive saliva and horizontal white lines across the nails called Aldrich-Mees lines.

But they were wrong. There were several known cases of male “arsenic maniacs”. In a celebrated case in London, Florence Maybrick was convicted of murdering her husband James. She had purchased flypaper containing arsenic from a local chemist’s shop, which she later claimed was for cosmetic use. Shortly thereafter, her husband James Maybrick died.

Suspicion was immediately cast upon Florence. The Maybricks’ marriage was a failure, partly due to mutual philandering and partly due to her husband’s severe drug addiction. When he was under the influence, James Maybrick severely beat his wife and threatened her. James’ brother insisted Florence be put under house arrest. An autopsy turned up faint traces of arsenic, and this helped the courts convict Florence of her husband’s murder.

James Maybrick, however, was a regular user of arsenic, as well as strychnine, and the conviction was controversial. His death could easily have been due to the double-dose of strychnine he voluntarily self-administered.

When horrified public health officials attempted to put a stop to the practice, they realized that an arsenic eater who was deprived of the drug would go into withdrawal – which had exactly the same symptoms of arsenic poisoning. Even worse, the arsenic eater could not maintain a dosage. The symptoms would return if they did not gradually increase their intake of the drug. By degrees, the poison was gradually banned and by the early 1900’s, the practice of using arsenic for cosmetic or recreational purposes was increasingly rare. By the 1920s, it had disappeared entirely.