Pundits often remark on how quickly presidents age while in office. The effect of four years or eight years of extraordinarily hard work and continual worry, not to mention fierce criticism from all sides, tends to transform a youthful, determined politician into an aged man.

Here are some of the remarkable physical transformations of United States presidents at the beginning of their presidency and at the end: 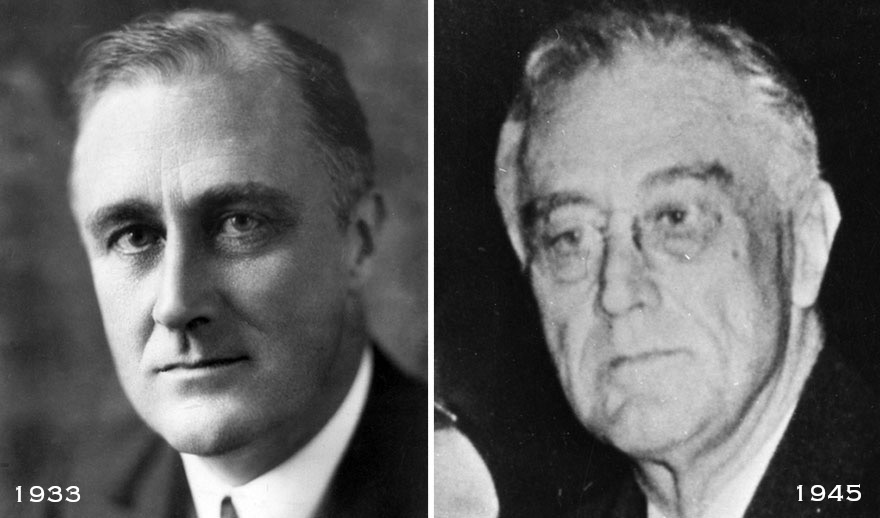 As you can see, not all of the presidents required eight years to age significantly. A major crisis or a continuous flow of minor crises has often worked a startling change in these familiar faces.

Life masks made of plaster were popular in the nineteenth century. They captured a 3-dimensional highly detailed record of a president’s face.

Abraham Lincoln had two life masks made in his lifetime. One was made in 1860, the year he was elected to the presidency; the other was made in 1865, when Lincoln was 56 years old.

My friend Ruwaida looked at the photographs of these life masks and said the mask on the left looked like a weaker man than the one on the right. What do you think?

If it’s difficult to discern the differences in these life masks, take a look at these photographs of Lincoln. Notice the heavy lines in his forehead and the bags beneath his eyes.

John Hay, who served as one of Lincoln’s White House secretaries, noticed that Lincoln “aged with great rapidity” during the Civil War. He said, “Under this frightful ordeal his demeanor and disposition changed — so gradually that it would be impossible to say when the change began; but he was in mind, body, and nerves a very different man at the second inauguration from the one who had taken the oath in 1861.” (AbrahamLincolnOnline.org) 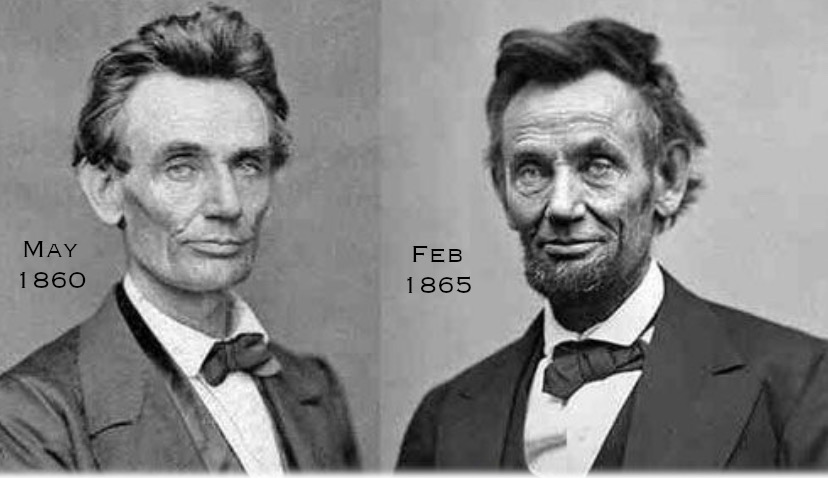 It’s difficult to believe that less than five years passed between the two photographs. In the photograph on the right, it’s plain that the weight of the Civil War was heavy on Lincoln’s heart. Worry had destroyed his health.

One other remarkable picture to show you is a cast of Lincoln’s hands, made a few days after the life mask in 1860, by the same artist, a sculptor named Leonard Volk.

Lincoln is known to have been a humble man, who was plain-spoken. This little anecdote about him, related to the cast of his hands, gives us a glimpse of his character:

Volk noticed Lincoln’s right hand was shaking. The president-elect had spent the day before greeting hundreds of supporters. Shaking hands with so many people caused his hand to swell.

The sculptor asked Lincoln if he could hold something in his right hand to still the shaking. The president-elect obligingly  produced a broom handle from his wood shed and set about whittling one end of it.

Volk recalled, “I remarked to him that he need not whittle off the edges. ‘Oh, well,’ said he, ‘I thought I would like to have it nice.'”

So the sculptor included the broom handle in the cast. It’s still visible, grasped in President Lincoln’s swollen right hand.

You can see a high-res very detailed photograph of Lincoln’s 1865 life mask here.