Gaby’s origins are obscure. She said she was born in Marseilles in 1881. Throughout her life, there were rumors that she was actually a poor Czechoslovakian girl named Edwige Navratil. The mystery was partially solved about 9 years after her death. I’ll come back to that in a few moments!

Gaby’s beauty and talent for singing and dancing fueled her rapid ascent through the dance halls of Paris to become a true star by the late 1910s. She was the toast of Paris, and men–including the young and devastatingly handsome King Manuel II of Portugal–competed for her affections.

King Manuel led a tragic life. He was born November 15. 1889. In February 1908, the royal family was completing the last leg of a long journey back home to their palace in Lisbon. Manuel and his brother Luis Filipe were in an open carriage with their father, King Carlos, and their mother Queen Amélie. They crossed the square at dusk, and shots rang out. Assassins struck the king, who died instantly, and mortally wounded his eldest son, Luis Filipe. Manuel was struck in the arm and the queen escaped harm altogether. Manuel ascended the throne just days after the death of his father and brother.

In December of 1909, the young king visited Paris, where he was introduced to Gaby Deslys and was immediately infatuated with her. He famously gave her a pearl necklace worth over $70,000. Gaby visited Manuel more than once at the Royal Palace in Lisbon.

Manuel was the last king of Portugal and he did not reign very long. The monarchy fell during the 5 October 1910 revolution, never to return. Manuel was exiled to England. Gaby had several London engagements and they maintained their relationship while she was there.

But it was undeniable. As her improbable star rose, his inexplicably faded. The United States beckoned to Gaby, and she traveled across the Atlantic to see America.

America loved Gaby Deslys, and her relationship with the deposed king faded into the background. Gaby even starred in a silent movie, Her Triumph, now unfortunately lost. Her co-star in the movie was a young dancer named Harry Pilcer.

Gaby was nearly as popular in the United States as she had been in Paris. She had more offers and engagements than she could count, and was making $4000 a week in America (about $113,000 in 2021).

While she was in America, her relationship with Manuel was put on ice for good. 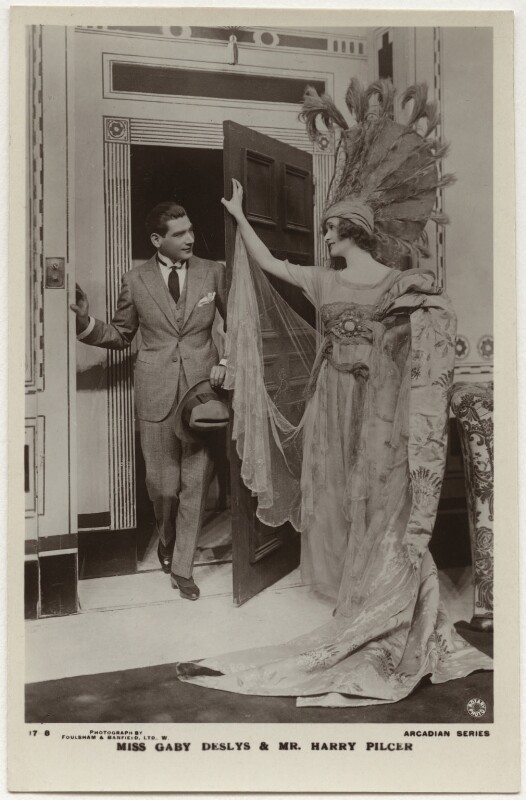 Eventually, however, she missed Paris and decided to return. She bought a large beautiful villa and filled it with priceless objects, including priceless Botticelli paintings. 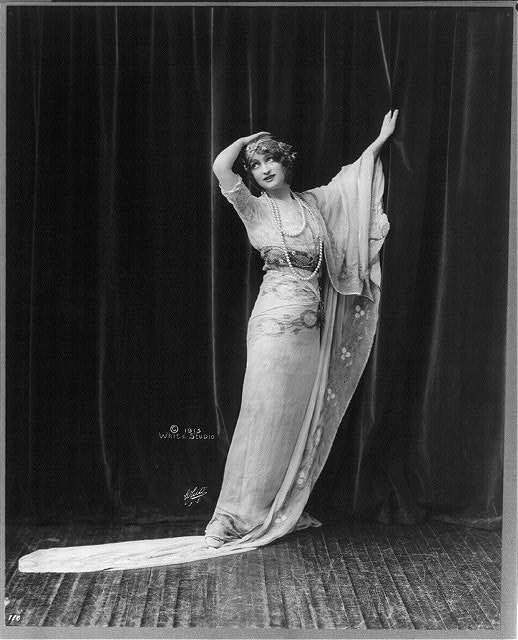 Manuel, you will be glad to know, did not break his heart over the loss of Gaby. Much of his time was spent reading Portuguese literature, and in 1912, he married his second cousin, Princess Augusta Victoria of Hohenzollern.

Gaby had a long term relationship with Harry Pilcer, but they did not marry.

In December 1919, Gaby contracted a throat infection, as a result of the Spanish Flu pandemic. Over the course of two months, she underwent several operations to clear the infection. Two of these operations occurred with no anesthetic. Gaby insisted the surgeons not scar her neck, which may have hampered their success. She died from complications in February 1920.

Gaby had no heirs and a vast fortune. The rumors about her antecedents returned to the forefront and a man named Navratil claimed Gaby was his daughter Edwige, who had disappeared many years earlier, pursuing her dream of dancing.

Nine years after Gaby’s death, the real Edwige Navratil returned to put a stop to her father’s efforts to claim Gaby’s money. Edwige didn’t reveal where she had been all this time, but it was undoubtedly her. I think her father may have honestly believed Gaby was his daughter. The two were said to bear a remarkable resemblance to each other, and both were pursuing a career in dance. Edwige’s disappearance happened shortly before Gaby’s rise to fame in Paris.

There are only two known recordings of Gaby’s singing.  This is Tout en Rose: jouir!